On Monday afternoon, I finally swallowed the pill and ventured into town to visit the bank.  Ministry opportunities usually can motivate me to climb atop my 'motor beast' more so than the actual thrill of the ride.  Venturing into the city with it, though, is no thrill!  Actually, it is quite the opposite!

I am not a motorcycle enthusiast; and, if it were not for ministry purposes, I wouldn't even own one.  I HAVE grown accustomed to the adventures I typically encounter seeing 'Africa' from the vantage point of a motorcycle, however.  But, I wasn't headed to the adventure-filled bush land of Africa on that day; on the contrary, I was headed into the overcrowded, under-organized city.   I groaned.  Nevertheless, I hopped on to my Honda 650, cranked it up, and headed out of the gate. 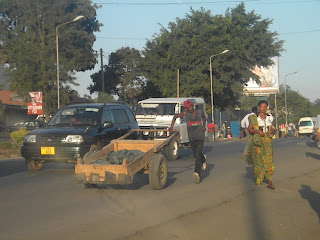 When I got to the main road, it was as I expected it to be--packed full of buses, cars, motorcycles, bicycles, and pedestrians very precariously interwoven together on the road, sidewalks and ditches.  This year the city installed their first ever traffic lights which has really paid off in lowering the congestion and confusion by about 1%

I praise the Lord, though, to have made it relatively quickly in to town and on to the bank where I found that the ominously long line to which I am accustomed was surprisingly short!  That was good news since I needed to make it back out of town again in a hurry if I were to make it to the Christian bookstore before it closed.

Thus, I was on my way to buy some church songbooks so that I could carry them with me to Babati the next day for Pastor Munah.  He's one of our village pastors who has been pastoring in the same church for more than 30 years.  He had  requested them since they are sold for about $1.50 here in the city as opposed to about $2 in the village.  That 50 cent difference can be significant when you are talking about village life!

Having successfully maneuvered the bike back outside the city limits made me somewhat 'giddy' at the prospect of pushing my bike passed second gear.  But the thrill was short lived in that I saw my turn approaching so I  turned my right blinker on and began slowing down.  By the time I reached the bottom of the hill I was going slow enough to make the turn off road so I glanced at my sight mirror and saw a car some ways behind me; but, I  knew that it would slow down because of seeing my blinker AND my brake lights...both of which were working fine.  Thus, I turned into the right lane...

Most people do not show motorcycles the same respect they would for a  much larger vehicle for some reason--even in the States.  But, in and around Arusha, it's even worse because most people don't follow would we would consider to be the simplest of 'road courtesy rules.'  I know that...and have to factor that in when driving...whether I'm on my bike or in my car.  But, sometimes, you can't factor in everything all the time!

...I was immediately struck by a small SUV type vehicle attempting to pass me on the RIGHT--during my right hand turn!