My day in the bush 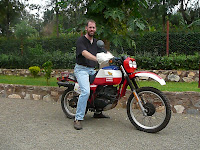 Climbing on to my Honda 250R Scrambler, I choked and kick started it then took off for another Thursday in the bush.

Only 10 kilometers out of town I soon encountered a police man. Why? Because he had admired my bike several times as he saw me pass by and today he decided to hassle me into agreeing to consider selling it to him.

But, here in Tanzania, promises are pretty cheap so I led him on long enough until he let me go without a ticket for doing nothing wrong. Thanks man!

After that I sped on toward the village of Mdori where I have spent the better part of a year and a half witnessingand preaching. I encountered major road repair vehicles destroying the road ahead thus I search for the first 'footpath turn motorbike trail' and head toward bushland. I have to be careful not to run over any thornbushes along the way because I don't want to have to push my bike several kilometers to the nearest bike tire fixer. It only costs 1,000 shillings to fix (about 80 cents!) but 1,000 shillings is all I had and I planned on using it to by lunch later. It would have been a tough choice between fixing my tire and eating lunch.

Suddenly, I happened upon some tribesman out grazing their cattle. They are dressed like the typical Datooga tribesmen (naked) except for arm and waist beads and of course a toga thrown over the shoulder. I tried to draw nearer to them but the noise of the motorcycle confuses them and sent them fleeing in panic.

Owell, I tried to them in Swahili but most only know their own tribal language and those who know Swahili STILL DON"T TRUST YOU. I can't say that I blame them. Here I come prancing up on my electric donkey wearing a firey red helmet. To make matters worse I take off my helmet to expose my horrifying white skin (although I do have a pretty nice tan from my neck up and from my biceps down to my fingers). Nevertheless they were not empressed with my farmers tan and put quite a lengthy distance between me and them; but not so far so that they couldn't glare at me to see what kind of animal I was. I decided to skip that witnessing opportunity and continue down the trail toward Mdori.
Posted by Rodney at 12:24 AM

Labels: My motorbike aka 'electric donkey'