My day in the bush--continued... 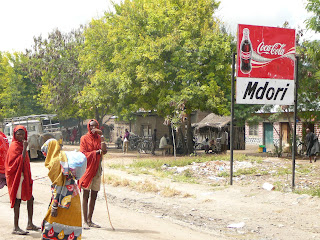 As I sped on to the village of Mdori where I spend my time witnessing 3 times a week, I passed through the African bush land on foot paths and cattle trails.

I like the cattle trails better because they are wider and straighter but the ground is clumpier which makes it more treacherous on my bike. Certain parts of the trail are dangerous because of the overgrowth of African thorn bush which produces thorns from two to four inches in length! They resemble hypodermic needles and can ruin your day if you hit them while on a motorcycle. I steered clear.

Eventually I made it up to Lake Burunge. One day I tried to pass on the east side of the lake so I can possibly see the hippos better; but, I was strongly warned by some locals to turn back because there were cape buffalo watering during that time of the day. A decision to continue would have been deadly for me as there is no other animal that surpasses the buffalo in killing people in Tanzania. The far edge of the lake sharply borders the Tarengire National Park where we have visited on many occasion with guests from America to see zebra, wildebeest, giraffe, elephant, lion, cheetah and more.

So, instead, I traveled on the west side of the lake and spotted a number of hewn-out canoes the local folks use for fishing. Most of the fisherman had come in already with their first large catch for the day. I have eaten this type of small fish before, but I do not prefer the way they cook it. They throw the whole thing—skin, scales, head, eyes, etc, etc, etc—into the deep fat fryer and let `er cook until crispy. Not everyone one eats the head and tail, but most usually do. The mere sight of one now makes me want to…well…anyway…you understand my limitations in that area.

Finally, after an hour and a half on my bike I safely arrived in Mdori.

It is market day and the village is bustling. I figured that I would shed a few pounds of weight by leaving my coat and helmet in the room I rent to hold Sunday services. I wanted to just slip in and drop them off and then head back to the market, but about a dozen kids followed me in. They really have no sense of ‘time’ as far as when I tell them, “No church today. Come back Sunday at 10AM.”

‘Time’ to the average villager, especially youngsters, is not divided up into ‘hours of the day’, instead it is divide up into ‘events of the day.’ Time to milk the cows, time for morning tea, school time, lunch break time (kids walk back home, cook their food, eat, then return to school) time for schools to let out, time to gather fire wood for evening meal, time to wash up, time to milk the cows, time for bed. Most never even own a clock let alone ever look at one.

Thus, I shuffled the little rascals out of the room and headed over to pass out John & Romans booklets and to talk to people about Christ.

After some time of doing this in the market I made my way out to visit Bruno. Bruno is a 75 year old Catholic whom I have been witnessing to out of the Bible for about a year. He is a talker for sure and very gracious. Nevertheless, our conversations are usually very deep and meaningful. Although he claims to have been saved by grace through faith, he refuses to leave the Catholic Church as it would cause a great breech in his family and community.
Bruno told me that when missionaries came to his village in the 1950’s they gave away bicycles, clothes, shoes, food and many other things thus creating a huge following of people. He didn’t like the way it ‘cheapened’ the church so he dug his heals in to his catholic faith and said he wasn’t for sale. This attitude is commendable but where he has chosen to take his commendable stand is miry clay. It’s saddening to spend another day with him knowing that he won’t budge. We prayed together and I promise to come and see him again.

The day was growing late and I needed to get back on the road so I made my way back over to the room to pick up my helmet and coat while talking to and greeting several people including Datooga and Maasai. I greet the Datooga with the Datooga language and the Maasai with the Maasai language and most others just in Swahili. They get a kick out of hearing me talk in their tribal tongues and it fuels my desire to learn more.

But, it’s time to go, so, after praying for the Word of God to take root into the good ground and spring up into everlasting life, I kick-start my bike and take off.
Posted by Rodney at 4:25 AM