Yes, you read the title correctly--in this continuation of the 'My Day in the Bush' series, I have yet another close encounter. As if naked tribesman and killer Cape Buffalo weren't enough. Well, here is the start of the conclusion...

Instead of going back home the way I came, I decided to go back on the opposite side of the road…still bush, but more ‘wide open’ fields to cross. On this side, the Great Rift Mountain range is visible in the near distance.

I made it to the back roads that brought me up closer to the mountain range and the trees and bushes started to thicken some, though the way was still rather wide open. I casually glanced over to the left at the Baobab trees off in the distance when I saw that one had the bark torn off at the base and it was covered in red! Could someone have killed an elephant there? I wondered.

I went over to investigate more closely when I noticed that it was not blood but red paint. But, why would someone paint a tree red? The base of a Baobab tree can easily be 8 feet across and some are even hollow. Maybe someone marked it because they are storing ivory inside! Hmmm.

I stopped my bike and dismounted while pulling my helmet off. Almost immediately I heard a swarm of African Killer bees above my head! Whoa! The tree WAS hollow and there were several large holes about 15 feet up where the Killer Bees had made impressive hives. I pulled out my cell phone and opened up the video camera option and started recording. Unfortunately for me that after about 5 seconds of recording, a bee flew right into my neck and stung me. My obsessive/compulsive reaction was to murder the little bugger to prove that I was the man and thus in control; but, as soon as I did I knew that I was in trouble!

When killer bees are squished as I squashed this one little hoodlum, they emit a warning smell for others to rally forces and attack! Kinda like how my my wife reacts after I capture Greenland from her in the game of Risk!

Since I now had the attack stink on my neck, I felt an escape plan was necessary. Thus, I rushed over to my bike, threw on my helmet, mounted and zoomed to safety as several bees thudded into my coat!

As I sped away, I was NOT thinking of how lucky I was that my bike started on the first kick thus narrowly dodging yet another opportunity to injure myself. “I can’t wait to get home,” is what I WAS thinking, “so I can kick myself for not getting better video footage!”

Soon after, I found myself in a part of the bush of which I was not familiar. I knew that there was a ‘main road’ (huh!) nearby but I couldn’t pass through the thick hypodermic-needlelike bushes to get to it.

I started to double back and immediately I saw a small hut nearby so I went by there to say hello and ask for directions. As I pulled up on my ‘electric donkey’ I called out to announce my presence and asked for directions to the ‘main road.’ A small, older Iraqw man emerged.

The hut was normal enough—made of limbs, sticks, and thick prairie grass—the overall dimensions being about 10 feet long, 8 feet wide and 5 feet tall. An older man came out to greet me with a stunned look on his face; I figured he must not get too many white American visitors especially in his neck of the woods. 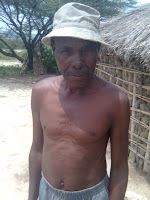 I got directions from him on how to get passed this towering, never-ending wall of BUSH and offered him a John & Romans booklet which I used as a springboard for witnessing about the Good News of Jesus Christ. He received it thankfully and then told me that he had been saved and followed up in believer’s baptism back in 1958! I was somewhat bewildered because 98% of the churches which have been in Africa since the 50’s believe in two common heresies: 1.) You cannot know if you are truly saved until you are dead (kinda like God saying--'Surprise, you’re not really saved and now there is nothing you can do about it")…and …2.) baptism somehow washes away ‘original sin.’

Thus, his claim was shocking.

But when he said that he had been a member of a church started by a GFF missionary then I understood, though saddened due to the fact that the nearest church is quite a distance away. He invited me in where we read the Scriptures and prayed together. Afterward I thanked him for his hospitality and then I was on my way.

My thoughts often go back to Andrew realizing that he presently lives 50 kilometers away from the nearest GFF church. When you realize that it takes me an 1 ½ hours to drive 50 k's on my bike whereas he would have to go on foot or bicycle, it makes your compassion grow somewhat. Though disappointed, I can hardly blame him much for frequenting the Lutheran church on Sundays.

Leaving there I head back down the trail which narrows to a widened path with encroaching wilderness on either side...