The Beginning of the End

So here I was just down the hill from our house at the Babati Hospital with a man  whom I've never met who was dying from a cause yet undetermined on the very morning I really didn't want to pull myself atop that 'electric donkey' of mine to anyway.  I left home early that morning in order to fulfill a discipleship engagement in the village of Mdori where I had been ministering 3 days a week.  Now, after only two hours time I had returned almost to my port of origin having been thrust out of my normal pattern of ministry into a 'way side' opportunity.

After dismounting the bike and locking my helmet to the seat, I rushed over to help carry the poor man...but...he was already being carried.  I followed them into the examining room where the men from the car left him and said that he smelled like 'dip.'

For those of you thinking 'Frito-Lay' or even 'Copenhagen' I should clarify by saying that 'dip' refers to the poison used on cows to kill fleas, ticks, tsetse flies, and other kinds of annoying pests which persecute cattle to no end.  The poison is usually sold in capsule form and then mixed in about 50 gallons of water.  The water is sometimes sprayed on the cattle; but, more typically they are herded through a dipping station where they are submerged...hence the name.

The question is then begged--why does this poor sick man smell like cattle dip?

Those who had carried him into the hospital quickly turned and left. I stayed behind to describe the situation as I discovered it and to relay a detailed account of my short conversation with the sick fellow to the nurse.  The nurse's preliminary astute analysis was that he was poisoned...and with the pungent aroma of cattle dip in the room, little more examination was necessary for validation.  The astute nurse then began asking him loud pointed questions like: "What is your name, young man? Where are you from? Who's trying to kill you? Are you trying to kill yourself?"  To which the only response she could elicit was: "Hospital!  Hospital!  I'm dying!  Take me to the Hospital!"

They immediately moved him to a ward where there was only one nurse on duty who then started inserting tubes into most every bodily opening he had.  Being understaffed, this was quite a battle so I stepped in to assist in holding him in various ways as he began to lose control of himself!  I fought to hold him...she fought to insert tubes...we finally prevailed as he settled into a forlorn mental state of helplessness!

The dutiful nurse then asked who would be in charge of caring for the patient.  I had to confess to her that I had unfortunately skipped the normal social formalities which usually occur upon being introduced to a stranger and thus knew nothing about the poor, sick, young man.    The head nurse for the shift finally came in and as she and I talked we reached an understanding that I would be responsible for him until it could be determined who he was and from whence he came!

From the hospital, I went back home to relax a few minutes, to get my bearings, and to talk to a Tanzanian friend of mine about what had happened.  We went together to bring him raw milk, as requested by the nursing staff, as well as a complete change of clothes.  We didn't think that he would survive the night, but we wanted to be prepared if he surprised us. 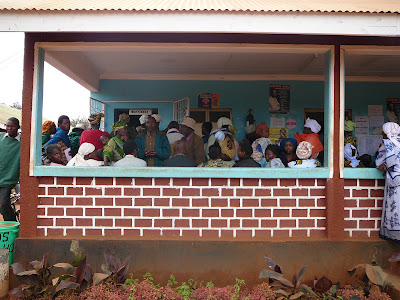 Morning came and we returned to the hospital.  To our surprise, the young man had made it through the night!  I wanted a chance to talk to him about the Lord but at that moment he was under heavy sedation.  I told the nurse that she should inform me if he were to recover and be in any condition to receive visitors.

Labels: A typical crowded reception area at the Babati Hospital