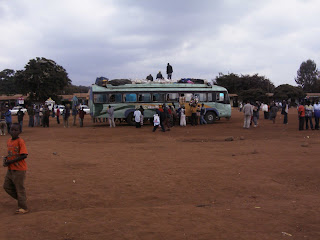 That was my first question.  Not a good ice breaker, I know, but the normal formalities for which the Tanzanians are known seemed inappropriate in view of the circumstances.

“Please help me…please take me to the hospital!”  was his panicked response.

I couldn’t smell any type of alcohol on the helpless man laying in the ditch crying out for help.  It was puzzling.  My previous experiences of finding drunk people passed out in ditches didn’t match up with this one any way.  It was early morning and I usually find people in ditches in the early evening…occasionally in mid afternoon…but this would have been the first morning encounter…unless you count crazy people whom I have sometimes encountered sleeping in the street in town in the early morning.   But they usually haven’t bathed in forever and are wearing rags for clothes...like the guy who climbed into the back seat of my car in town a few weeks earlier and then had an ‘accident’ in the back seat when we tried to get him out.  No, this guy was dressed well enough…and clean.  He was also in his right mind for the moment although panic stricken.  The more I examined him, the more puzzled I become.

Taking action seemed to be more relevant than to continue analyzing his puzzling state of  pain-stricken soberness so I ‘changed gears’ and started thinking of ways to get him to Babati.  I knew I couldn’t carry him on my motorcycle…he would fall off for sure!  At that moment, though, a bus leaving Babati full of passengers heading for the city of Arusha approached so I decided to stop it and ask for help.  They couldn’t help, of course, because how in the world would they get a forty foot long bus turned around on a winding dirt road which cuts through the African bush?  They did say, however, that the earlier bus had encountered him just an hour ago in the middle of the road and since they were at a loss of ideas on how to help him, they dragged him off to the side and left.  That would explain the drag marks I had seen which meant that he hadn’t been hit by a car.

As the bus pulled away a car was coming FROM Arusha going TO Babati.  Hey, if they’re going in the right direction maybe THEY will stop!  They did stop but there was no room, of course.  I proffered for a volunteer to ride with me on the bike as to make room for the puzzling sick man, but they found my offer unappealing.  Many were interested in gazing at the man before moving on; but, up to that point, I had no luck in finding help.

Then…finally…another packed car stopped…and they made room for the man.  It took three of us to carry the ‘dead’ weight of the man to the front seat and lifted him inside.  Then they took off for the Babati hospital and I followed on my bike.

“Should I just make sure he gets there and then be on my way?  Should I stay behind until he gets checked in?  Should I stick around to make sure that he’s taken care of properly?”  A thousand thoughts filled my mind!  I knew that patients relied on relatives and friends to feed and care for them while they were in the hospital.  There are no cafeteria services available.  I also knew that unless someone at the hospital recognized him upon arrival--no relative or friend would even know that he was missing!  What I also realized was that by the time we reached the hospital the man might even be unconscious…or worse!  That means that the hospital would look to me as a surrogate ‘friend.’

I followed them all the way back into town and then up to the hospital where I dismounted my bike and hurried up to the vehicle to help carry him inside.