Another One of Those Days 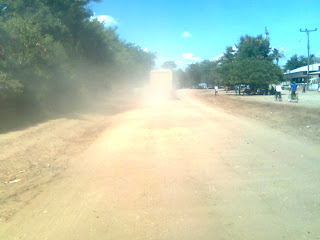 My previous series of blogs were all about what typically happens to me on a day-to-day basis when thrusting myself out into the world of 'Africa' with a Bible in my hand and waiting to see what I will encounter along the way...by God's predetermination, of course. But, what I would like to share with you now is an out of the ordinary scenerio in which I found myself similarily 'thrust into' by just going about my merry little day. So, you might call this:

Another One of My Days in the Bush.

I really did not feel like dragging myself atop that motorbike (of which I had spoken of so highly in the past) and barrelling down the long, hot, treacherously dusty road again on this particular morning. The week before the chain had broken and fallen off about 13 kilometers down the afore-mentioned road. I guess the dust not only clogs up my sinuses but also dries out the chain if not kept oiled regulary. My wife calls a lesson like this 'Too late smart.' But, I did become smarter because of it and I am thankful for that.

I had to go because I needed to keep a discipleship engagement with a young man which I had missed the previous week. But, I had been dragging my feet that morning trying to reason myself out of going. I couldn't justify it before the Lord so I 'saddled up' and rode off into the sunrise...but...I was on the road about 15-20 minutes later than normal.

That was when I saw the man laying on the left side of the road when I passed him about 7 kilometers outside of town. I didn't stop at first. As a matter of fact...I pass people laying in the ditch routinely. In the beginning I would stop and see if I could help folks, but the story was usually the same: either they were so drunk that I could hardly come within 10 feet because of the smell, or they were so drunk that they were passed out cold and therefore onlookers would have to inform me that they would be alright in a few hours. So, I just didn't worry about it.

But this young man was laying in a strange manner and there were drag marks leading to him from the center of the road...and...if that wasn't enough...he was attempting to reach his hand out as I drove by!

What should I do? Pass by on the other side...go over to where he was to get a better look at him?

Well, I did turn around to go see what I could do.

I stopped my bike several yards away, lowered the kick stand and rested the weight of the bike on top of it. I then dismounted while removing my full-faced helmet. It was then that I heard him crying in a faint voice:

"Please help me...please take me to the hospital."

It was then that I knew that I was in a real life Luke 10:30 situation! I'll let you familiarize yourself with the context and write more on another day.

Blessings from the Lord
Rodney